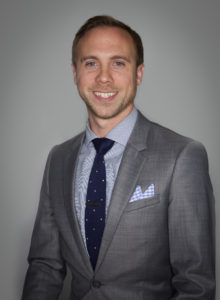 Dr. Matthew Jones was born and raised in Effingham, Illinois. He attended undergraduate studies at the University of Illinois in Champaign/Urbana. Next, he went on to study Optometry at the Illinois College of Optometry.  During his training at ICO, he was at the top of his class with accolades such as Dean’s List and Beta Sigma Kappa Honors.

“Dr. Matthew” had worked for Doctors Sehy and Jones in various capacities since his high school days, but he joined our practice as a doctor in July of 2008.  Since that time, in 2013, Matthew was the recognized by his peers as  “Illinois’ Young Optometrist of the Year.”  In 2014, he was recognized as one Effingham community’s top young leaders with the “Top 20 under 40” award.

Medical mission work has also always been one of Dr. Matthew’s main passions having been on multiple international trips since he was about 12 years old.  Recently, he has lead teams to provide eyecare to the remote villages of Honduras.  He also volunteers his time with the youth in the area through his church and OnEighty.

He now enjoys University of Illinois Fighting Illini sports, playing guitar, boating, and camping.  Above all things, he enjoys spending time with his wife Jennifer and three sons.

Dr. Sehy received a Bachelor of Science Degree, majoring in biology, in 1988 from the University of Illinois and his Doctor of Optometry Degree in 1992 from the Indiana School of Optometry. He was inducted as a Fellow of the American Academy of Optometry in 1994 and was the Illinois’ Young Optometrist of the Year in 2001.

Dr. Sehy was a captain in the USAF from 1992–1996 and practiced Optometry at Lackland AFB, Wilford Hall Medical Center and was Chief of Optometry Services at Reid Health Services Center. He joined Drs. Sehy & Jones Optometrists, P.C., in 1996 in Effingham, IL, and has provided Comprehensive Low Vision Services to the Greater Effingham area since 1997.

Dr. Bob Jones graduated from Eastern Illinois University and received his Doctor of Optometry degree from the Illinois College of Optometry in 1977. “Dr. Bob” has shown himself to be the regional expert in specialty and difficult contact lens fitting options.

In his free time, Dr. Bob enjoys working on home projects and spending time with his wife Jill, their five children, and three grandchildren. He has led multiple voluntary medical missions for more than 20 years. He is also very involved in his local church as an elder.